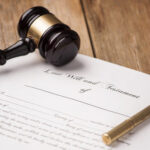 Consequences of Contesting a Will in Bad Faith

When a will is entered into probate, all of the beneficiaries are notified. Given the contents of the will, beneficiaries may have some concerns – they may have had them prior to their loved one’s death. Does the will represent what they know the decedent wanted? Or was it suddenly changed? Did the decedent… Read More »

Florida Law Requires Formal Process When Writing a Will

A decision by an Australian court has caused quite a stir among American attorneys who specialize in estate planning. The case, which came before the Supreme Court of Queensland in Brisbane, Australia, concerns a will written by a man named Karter Yu. In 2011, Yu was apparently feeling despondent and began writing a series… Read More »

Is a Revocable Living Trust Better Than a Will?

Whether you own a large estate or a small amount of property, you have a number of options for passing along your worldly possessions and providing for your loved ones after you’re gone. One option the American Association of Retired Persons reports has been growing in popularity in recent years is something known as… Read More »

Brittany Maynard knew she was going to die. In early 2014, she had been diagnosed with brain cancer. By the spring, medical experts overseeing her care estimated she had just six more months to live. Rather than allow the cancer to fully run its course, Maynard took her own life during the first weekend… Read More »

Florida Differs From Other States When Writing a Will

Want to prevent your relatives from fighting over your will after you die? In most states, a person can put the brakes on a court battle between family members by writing what’s known as a “no-contest clause” into the will itself. If any of your relatives have such a clause in their will, that’s… Read More »