Close Menu
Home > Blog > Estate Planning (Wills, Trusts, Deeds, Business Succession) > Is A Verbal Promise To Leave Something To Someone In A Will Enforceable?

Is A Verbal Promise To Leave Something To Someone In A Will Enforceable? 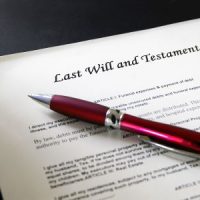 Imagine that you have a friend, who is older. As your friend gets older you help him with his day to day activities, help him take care of his home and help him with his finances. You are certainly not doing it for any money or payment, but he promises you that in return for your help, he is going to leave you a sizable inheritance.

As time passes on, your older friend passes away. Yet , it turns out that he leaves nothing to you, in his will or estate plan. You remember that he promised you he would, and that you kept helping him partly in reliance and anticipation of getting the inheritance.

Now that you have been left out, can you contest the estate, or challenge his will, on the basis that he promised you that he would leave something to you?

Florida Requires Wills to be in Writing

In many states, this would be a valid enforceable promise, giving you the right to challenge the estate or the will. It is called a contract to make a will, and in Florida, such promises are not enforceable—at least, not when they are made orally, and never reduced to writing.

Almost any promise to do anything with a will or estate is not enforceable unless it is in writing.

These kinds of oral promises or agreements are invalid not just in a promise to leave something to someone in a will, but also in any promise to revoke, alter or amend a will (such as if someone were to promise you that he was going to revoke his current will, and make a new one that includes you in it).

Not only does the promise to make, revoke, revise, or alter a will need to be made in writing, it also has to be signed, and have two witnesses to it, the way that any will would.

Exceptions to the Rule

There is really only one exception to this requirement: If the person that was orally promised something in a will doesn’t live in Florida, but lives in a state where such a promise or agreement would be enforceable, then the promise can be potentially enforced here in Florida.

This restriction (that contracts to leave something to someone in a will must be in writing), only applies to a contract between the maker of the will, and you, the person who was promised something in the will. An oral agreement between two people who expect to get something from a will, may be enforceable, even if not in writing.

So, for example, if you and your sister both agree that whoever dad leaves money to, you both will split the inheritance between you, that may be an oral promise that can be legally enforced.

The Law Offices of Larry E. Bray  can help with any contested estate problem, to see if you have grounds to challenge a will. Contact West Palm Beach estate planning lawyer Larry E. Bray today to schedule a consultation.

By Larry E. Bray, P.A. | Posted on July 6, 2022
« How And When To Use A Post Occupancy Agreement In Your Closing
When Should You Use A Power Of Attorney, Or A Guardianship? »