Remedies For Breach Of Contract Under Florida Law 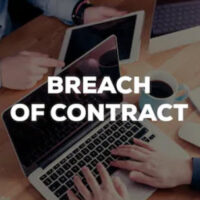 In order to determine whether a breach is material, it’s critical to evaluate the facts of the case. Hypothetically, if a baker ordered ten bags of flour to be delivered on Monday evening, and they weren’t delivered until Tuesday morning, this may or may not be a material breach. For instance, if the contract specified that time was of the essence and that the flour must arrive Monday night, this may be found to be material. Particularly if the baker had ordered the flour to be delivered Monday evening so that it could be used to fulfil a bakery order Tuesday morning. In that case, the flour failing to be delivered on Monday night as specified in the contract, would likely result in financial damage due to being unable to fulfil the Tuesday morning order of baked goods. This would likely be found to be material and, depending on the specific terms of the contract, the baker may not need to pay for the flour, or the flour provider may be financially liable for the lost income.

Financial Remedies for Breach of Contract

There are a number of forms of financial damages available to those who have suffered a breach of contract. Compensatory damages are likely the most common form of breach-of-contract damages. Compensatory damages are intended to put the non-breaching party back in the position they would have been in financially had the breach not occurred. For instance, in the baker and flour example above, if the Tuesday morning bakery order was $500, and the baker was unable to fulfill the order because of the delayed flour shipment, the compensatory damages would be $500 (perhaps minus the cost of the flour, depending on the terms of the contract). This is because, had the terms of the contract not been breached and the flour arrived on time, the baker would have received $500.

If you have experienced financial damage as a result of another party unfairly breaching a valid Florida contract or legal agreement, the Law Offices of Larry E. Bray, P.A., are here to help. Schedule a free consultation today to find out how West Palm Beach breach of contract lawyer Larry Bray can help you get the representation and compensation that you are entitled to.

More on Breach Of Contract